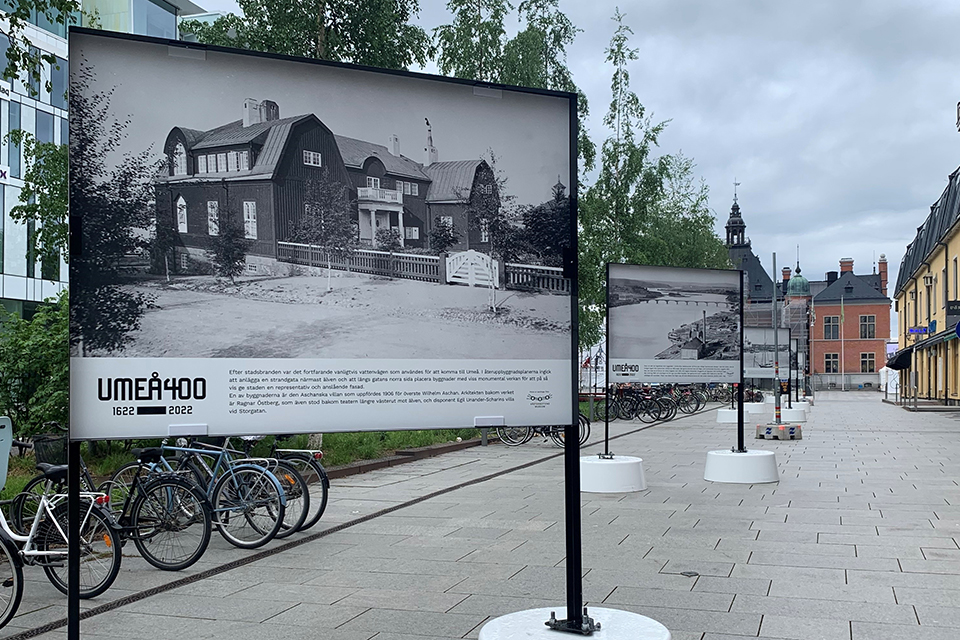 The county governor’s residence, the town hall and the entire town centre with its many homes – together old Umeå – were lost to a fire in 1888. However, this didn’t thwart the people of Umeå, who numbered about 3,200. They simply rebuilt their town. These photographs from Västerbotten Museum can give us some idea of what life was like in the small town on the Ume River from the early 1880s to the early 1900s. This summer, you can also see the images in physical form in an outdoor exhibition at Rådhusesplanaden. 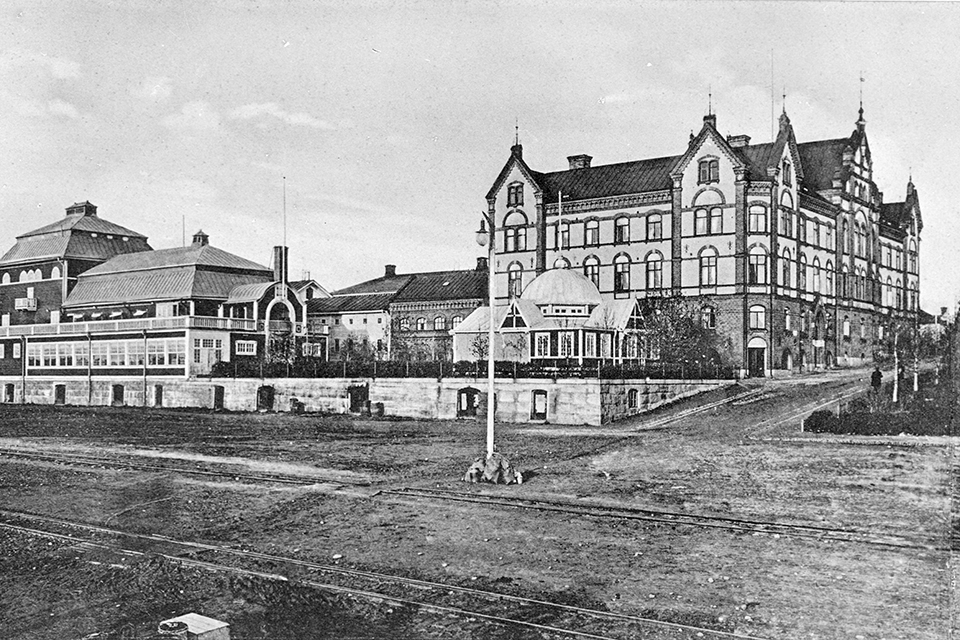 Six years after the town fire, in 1894, Stora Hotellet was erected in Umeå. The hotel became the town’s foremost entertainment venue and for decades was the only place in town licensed to sell wine and spirits. Also note the pavilion and the terrace overlooking the river. On the left of the image, we can see Umeå’s new theatre, which could seat 416. The theatre was inaugurated in 1907, but due to a broken masonry heater in a nearby farmhouse, the theatre burned down already in 1913. It is said that efforts to extinguish the fire were complicated by the severe cold, and that holes had to be made in the frozen river to get water for the fire engines. 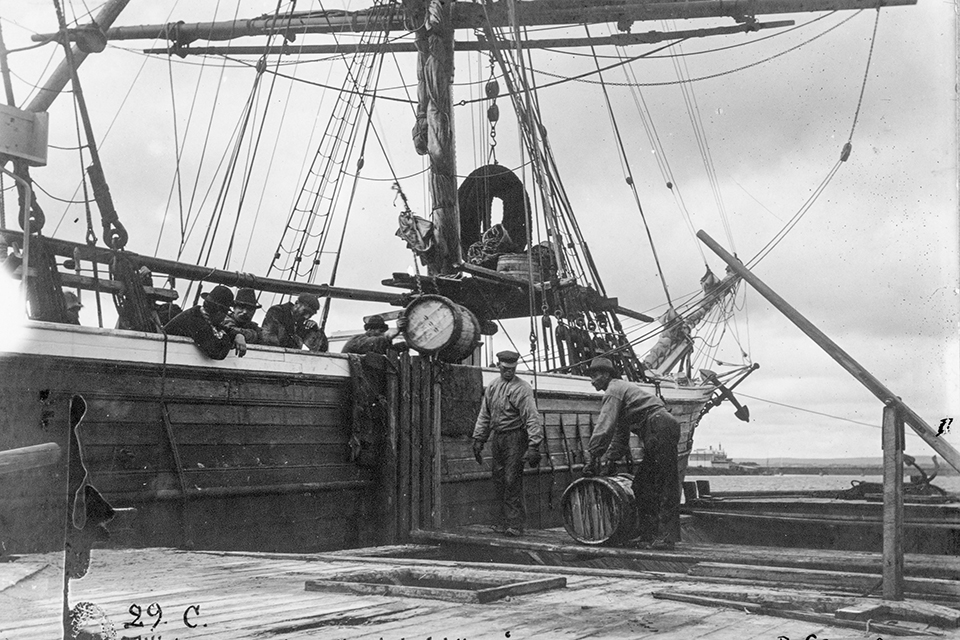 Tar was once an important export good for the port of Umeå. The tar distillery was originally where Broparken now lies and was later moved to Teg. In the autumn, it was not unusual for there to be a thousand or so barrels of tar at the distillery.

At beginning of the 1900s, the company Umeå tjärexport AB handled more than 80 per cent of the tar produced in Västerbotten County, which totalled about 18,000 barrels a year. The company erected trading sheds along the railway lines to which the tar manufacturers could deliver their product. A number of agents and buyers in the Netherlands, Belgium and France took care of sales. 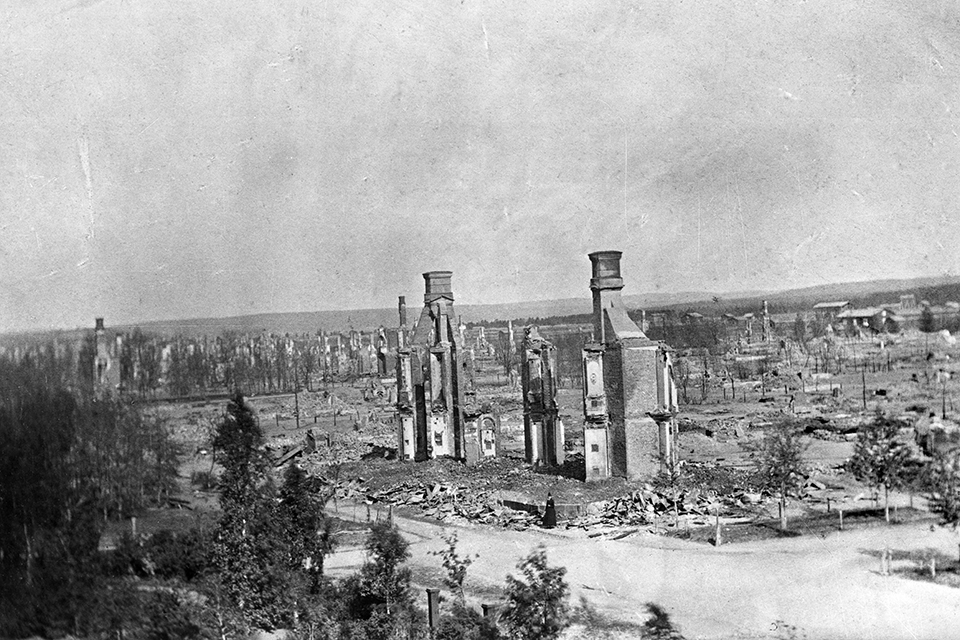 On 25 June 1888, the day after Midsummer’s Day, the entire eastern side of the town of Umeå, the shipyards at Teg and the houses on the island of Ön were devastated by a fire that started in the brewery by the banks of the stream Renmarksbäcken. The fire, which started in the middle of the day, cost no one their life but left about 2,300 of Umeå’s 3,000 residents homeless.

Of the four major fires to have blighted the town, the fire of 1888 is the most well documented. This photo of the devastated town with only chimney stacks left standing was taken from the roof of the old prison. As for the lady in black, we can only speculate as to who she was, what she was thinking and what she was doing among the ruins. 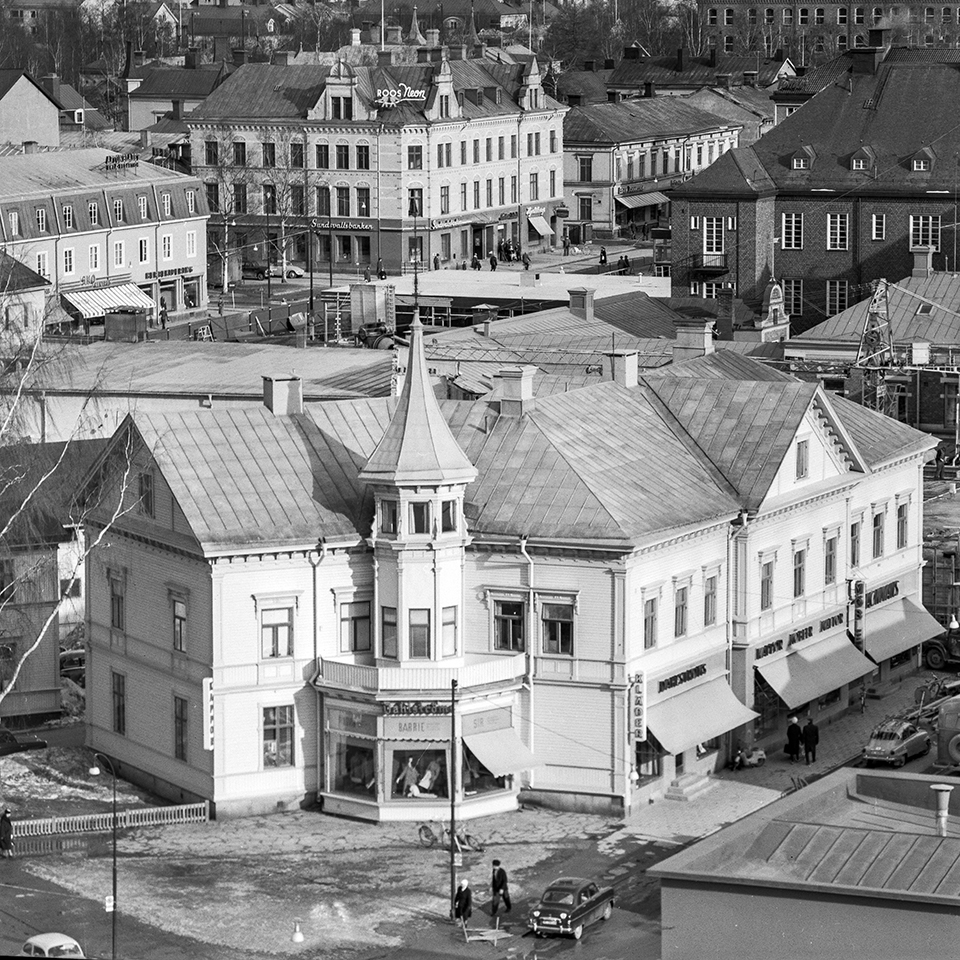 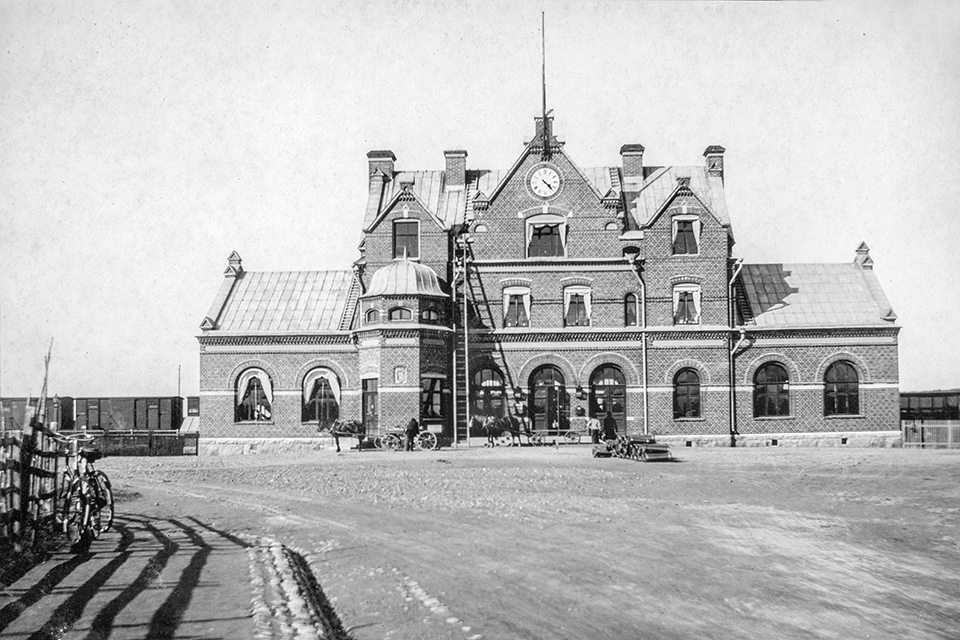 In July 1895, construction began on the railway line from Vännäs to Umeå, and on 30 September 1896, a train bringing royalty arrived at the new station house in Umeå. The inauguration was a joyful public occasion, with King Oscar II of Sweden making the inaugural speech. Once the line to Umeå was finished, the next line, to Storsandskär, was started, which seemed a little odd as the port of Holmsund ought to have been a better choice. The reason for this was that the people of Umeå were worried about losing their control over trade in the town. It was not until 1924 that a line to Holmsund came into service. 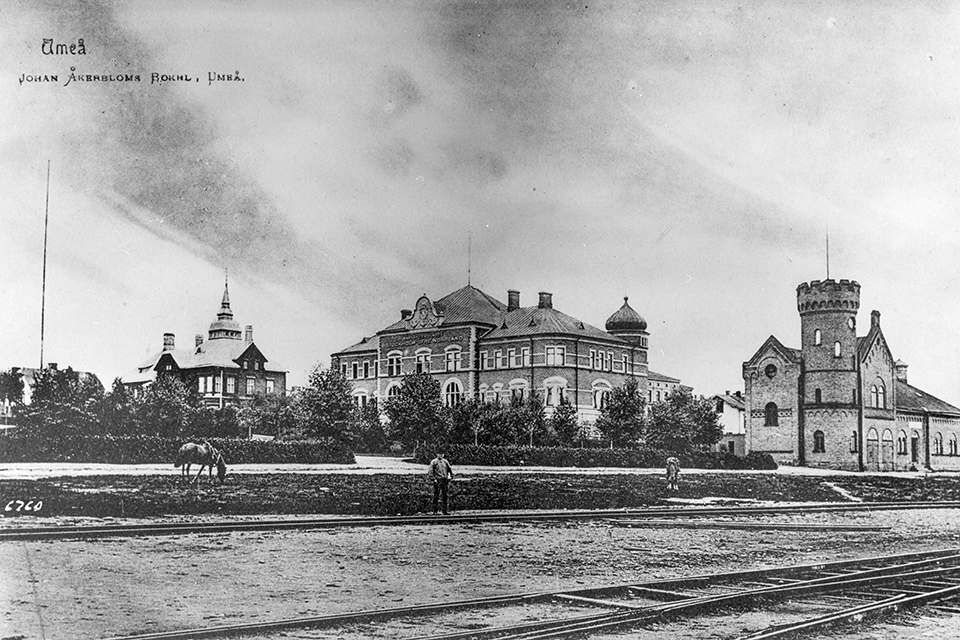 If you stand down by the water in Rådhusparken with your back to the Väven cultural centre, you can still see parts of this view with the power station and the old fire station to the right. In the middle is the bank that was built following an architectural competition in 1894 and which now houses a branch of Handelsbanken. Up to the left, by Storgatan, you can see the beautiful Åkerblom building, built in the National Romantic style. Note the railway tracks and, in particular, the horses grazing in the middle of town. 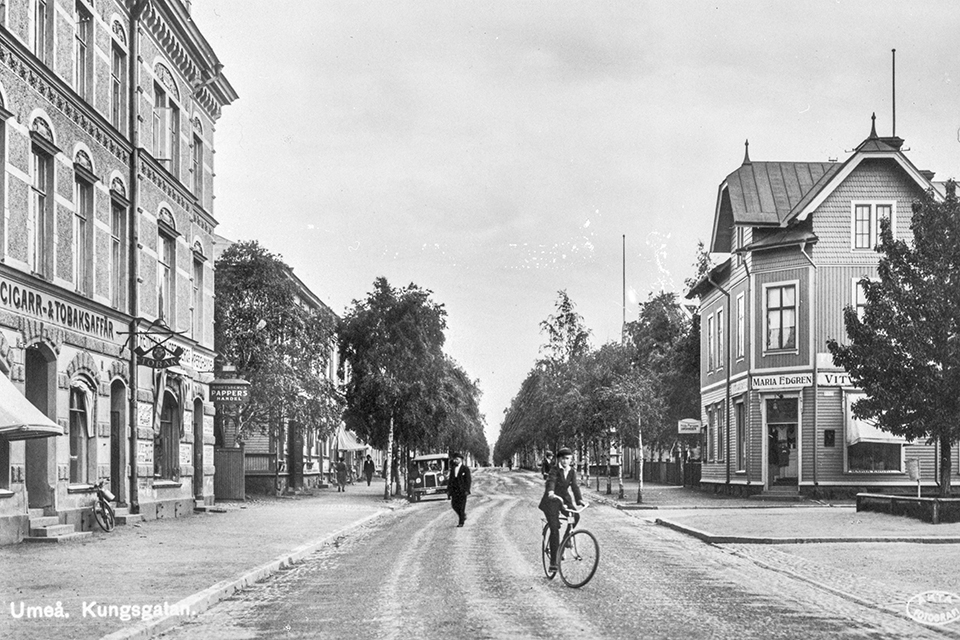 This is a photo taken from Rådhustorget, facing east down Kungsgatan, from about where we now find the entrance to the Utopia shopping mall. Until 1962, where the mall now stands was a large stone building that housed Sundsvallbanken, as well as Saedén’s cigar and tobacco shop and Reinhold Hjortsberg’s stationery shop. Just behind it we can make out the wooden building that housed Edvin Johansson’s grocery shop, while on the left of the picture, where Åhléns department store now stands, was Maria Edgren’s household appliance and dressmaking shop. 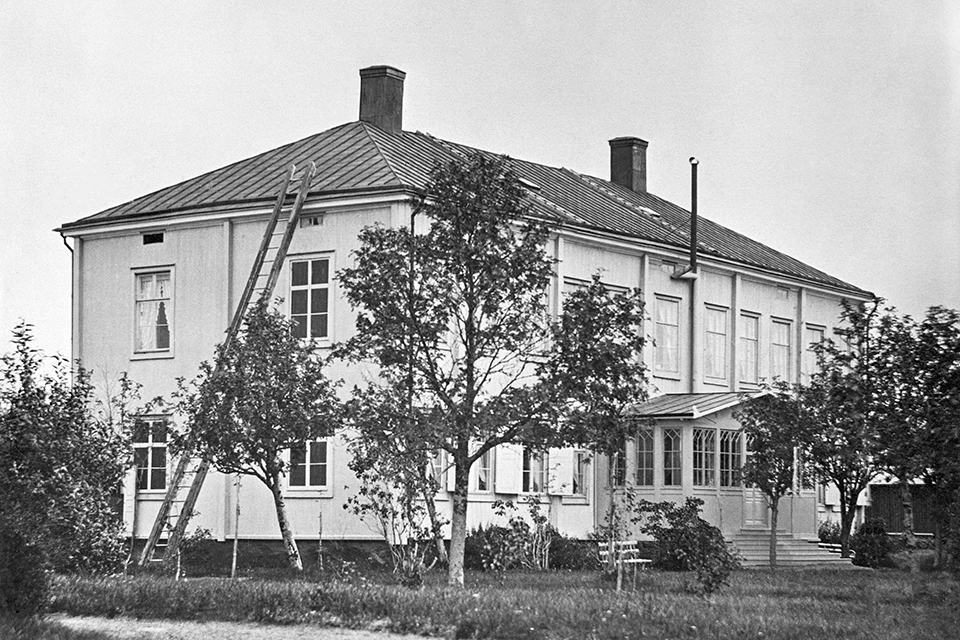 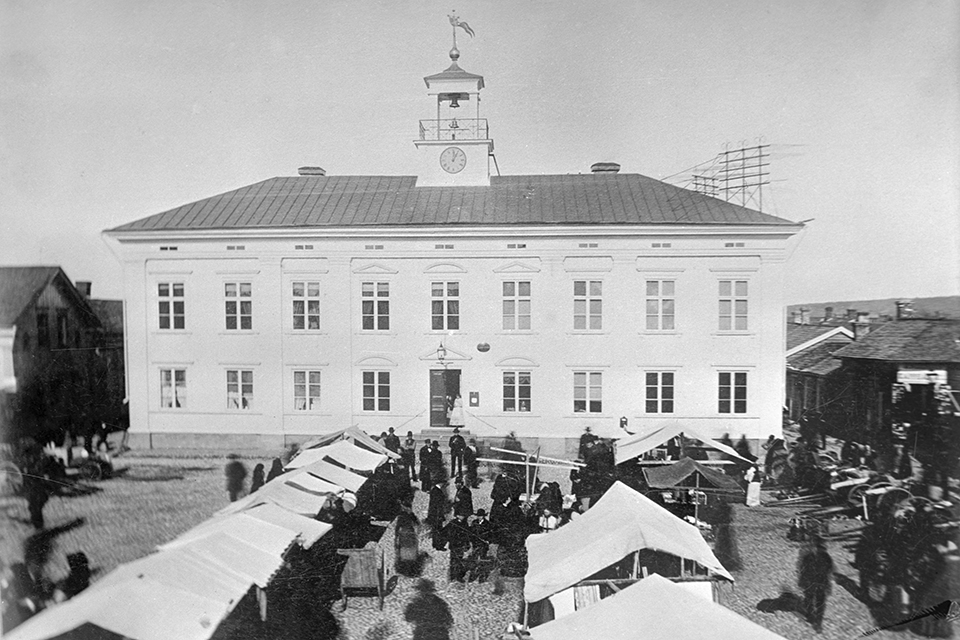 Erik Widman’s map from 1643 shows an elongated building in the town square, most probably the town hall. In the late 1640s, complaints were made about the dilapidated state of the town’s public buildings, indicating that the town hall was already many years old. Construction of the town hall pictured here, the predecessor of today’s building, was begun in 1814, according to the blueprints prepared by Ludvig Hawerman. In addition to the customary official rooms, it also housed the town cellar. Like most of Umeå, the town hall also burned down in the town fire of 1888. 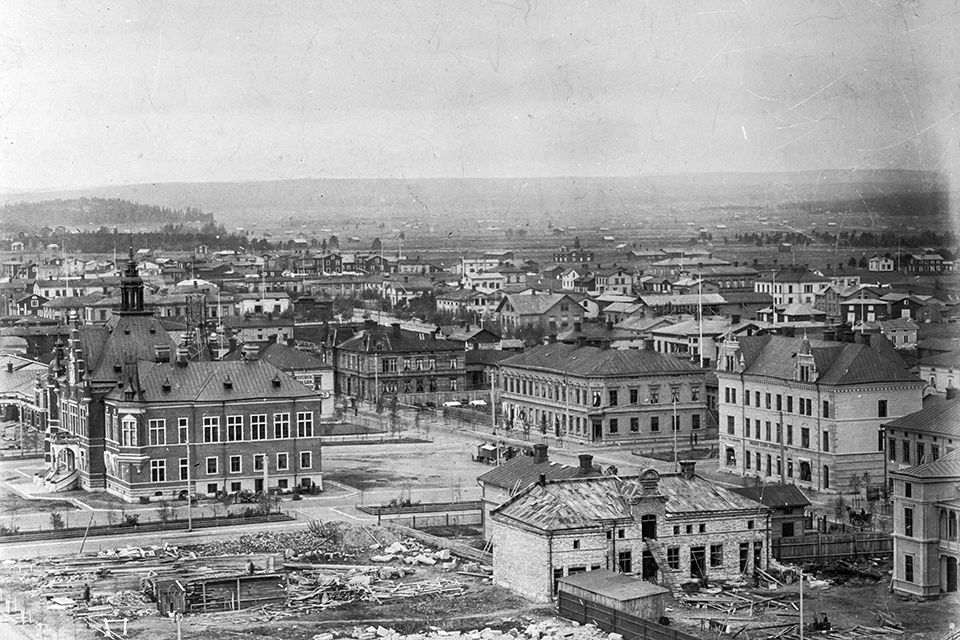 At the beginning of the 1900s, Umeå had about 3,200 inhabitants. In this photo of the Rådhustorget district, in addition to the town hall, we can also see the building that housed Sundsvallbanken, where today we find the entrance to the Utopia shopping mall. At the bottom, we can see the makings of the Åkerblom building, which was under construction. The countryside was noticeably closer to the town centre. We can see that at this time, the town ended at what are now Västra Norrlandsgatan and Västra Esplanaden. 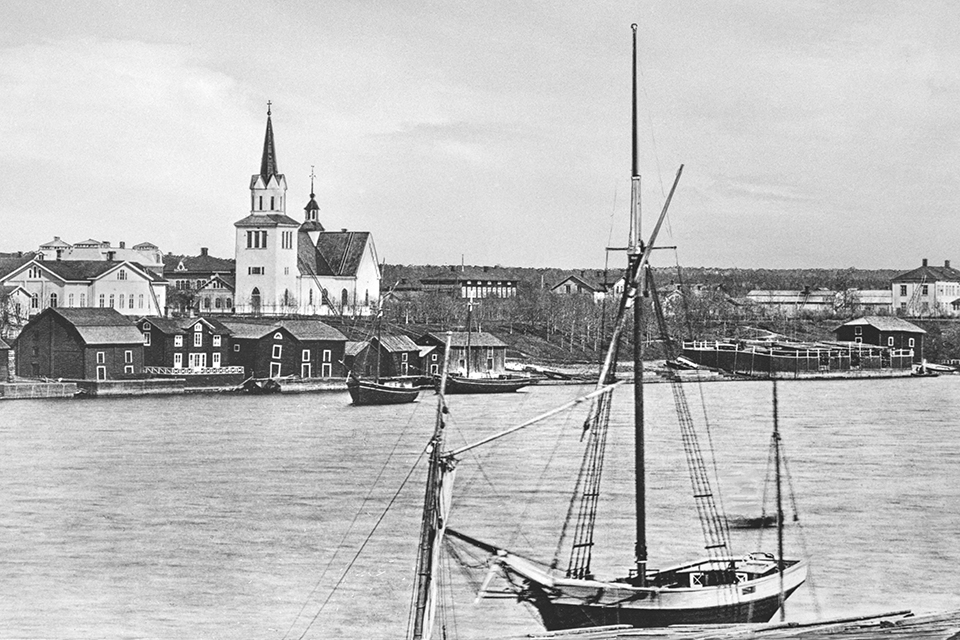 Taken from the Teg side of town, this photo presents a different Umeå to the one we know today, with sailboats and wooden buildings along the river below the church. On the right by the riverside, we can see the cold bathhouse, and just above it is the old prison, which still stands today. Immediately to the left of the prison is what was then the county governor’s residence. The beautiful town church seen here also burned down, but not in 1888 like the rest of the town. It was lost to a fire six months earlier, on Christmas Eve 1887. 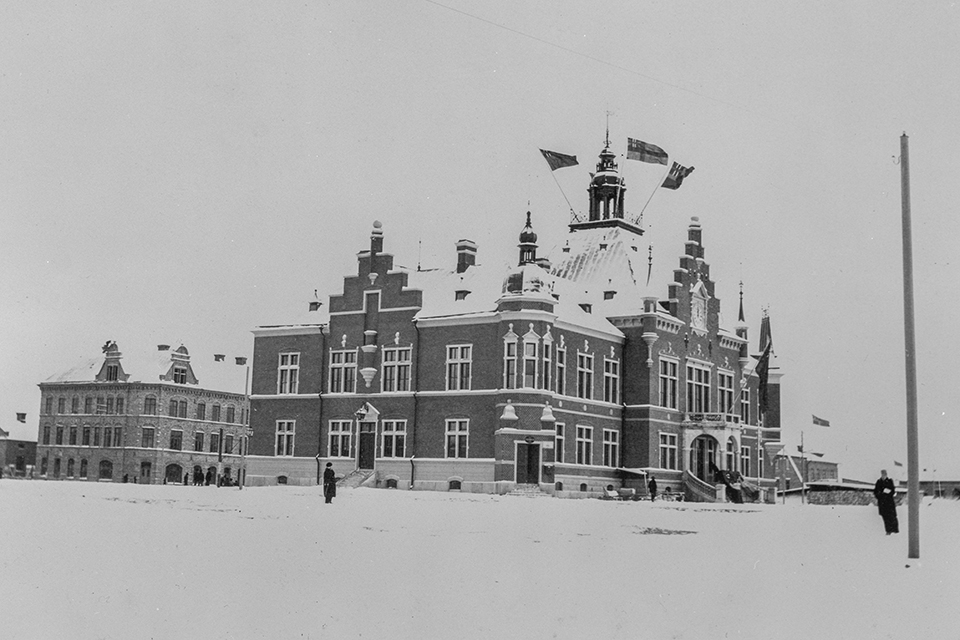 On Monday 24 October 1892, Umeå’s new town hall was ready to open. In addition to the town’s administrative offices, the town hall also housed the police station and holding cells. Construction was begun in the summer of 1890, and when it was finally completed, the total costs were about SEK 200,000. Unfortunately, the construction was more expensive than expected, and the master builder went bankrupt. The workers were not paid their wages, and when the master builder turned up at the building site, the workers threw bricks at him. Eventually, the town council, known then as the town treasury, covered the costs so that the building could be completed. The town hall was designed by the architect Fredrik Olaus Lindström. 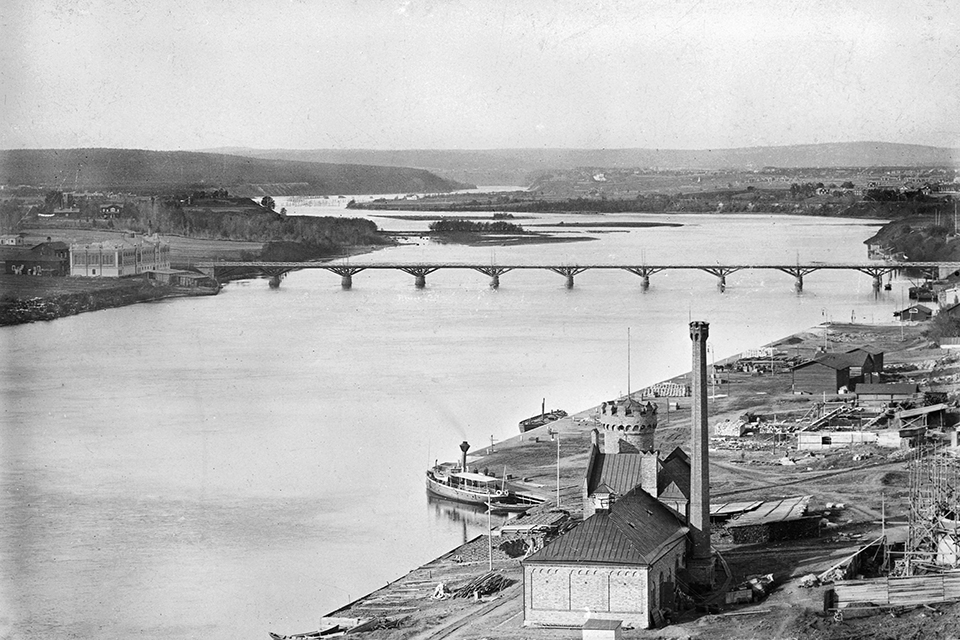 Although there were few buildings left in Umeå following the town fire, this photo offers many fascinating details. It was probably taken from the church tower in the mid-1890s. In the lower right, we can see the old power station, which was built in 1892 and still stands. We can also see some of the von Ahn warehouse, which stands next to the present day Broparken. The brewery on the Teg side, next to the bridge abutment, was built around 1890, and a little higher up, we can see the Böle residence. The old bridge, which was inaugurated in 1863, had not yet been fitted with steel arches on the top side. If we follow the river a little further downstream, the Böle islets looked very different to today. 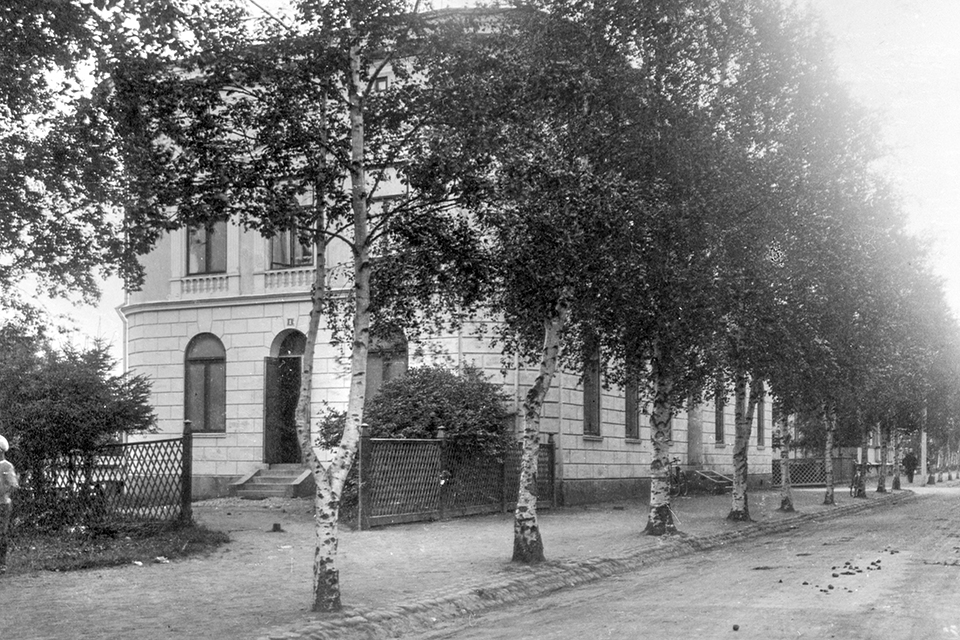 The first building to house Westerbottens enskilda bank was a plastered and yellow-coloured, two storey stone building in a neo-Renaissance style. It followed an 1877 design by Captain Axel Cederberg of Sweden’s Road and Waterway Construction Service Corps. At the time, Cederberg was the town’s technical advisor. The building on Storgatan was known colloquially as Smörasken, the butter dish. After the bank moved its business to Rådhusparken in 1894, the building had many different functions, housing, for example, the town library, as well as the Västerbotten Museum for a time. 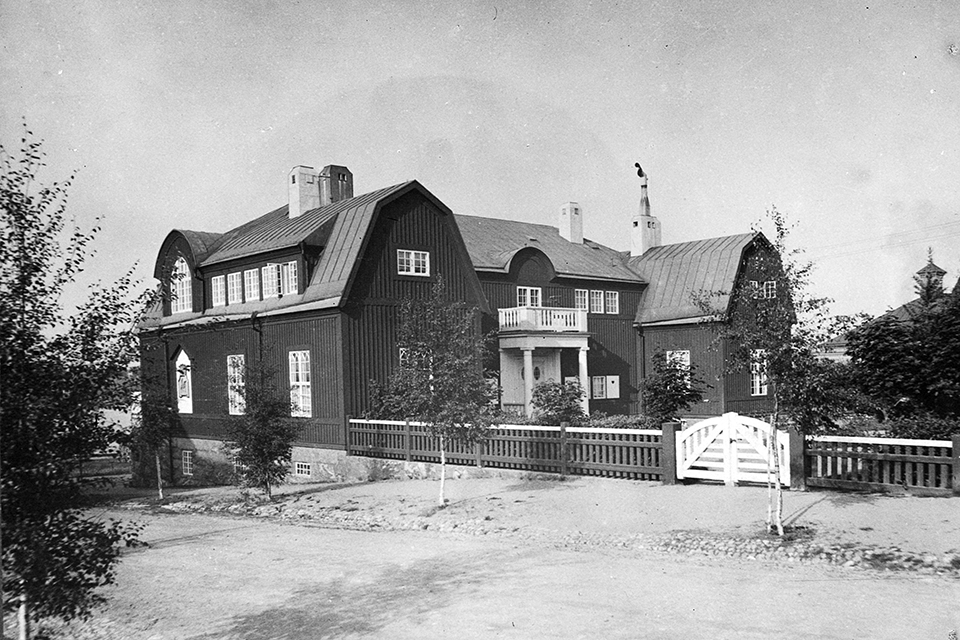 After the town fire, the waterway remained the main route into Umeå. The reconstruction plans included the construction of a road alongside the river, with monumental buildings along the northern side of the road to provide the town with a suitably imposing façade.

One of these buildings is the Aschan villa, which was built in 1906 for Colonel Wilhelm Aschan. The architect responsible for the design was Ragnar Östberg, who was also responsible for the theatre further west towards the river and the villa on Storgatan owned by general manager Egil Unander-Scharin. 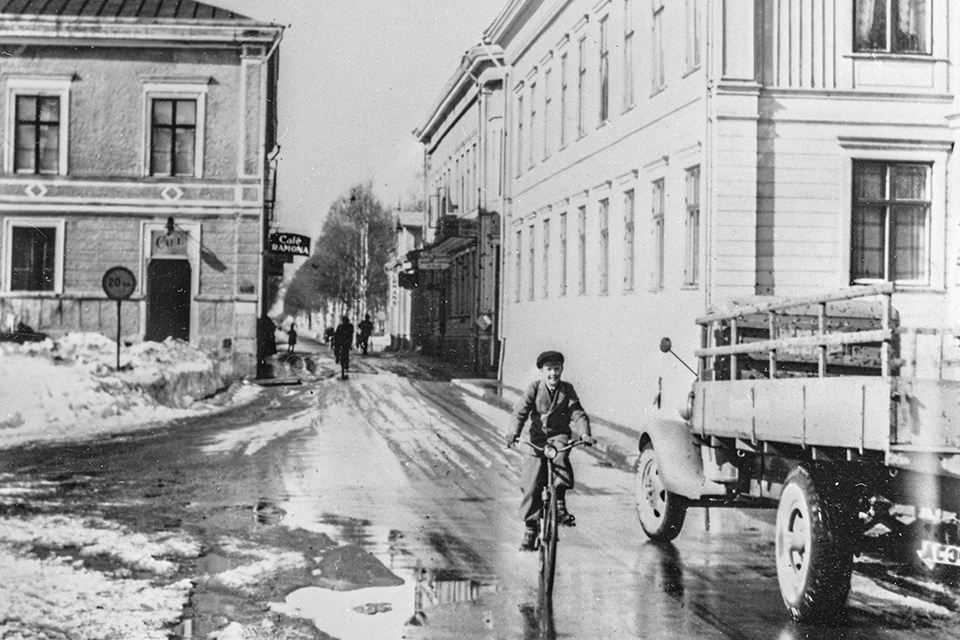 The 1888 town fire in Umeå devastated large parts of the town east of the stream Renmarkbäcken. Just west of the stream where the present day Teg bridge has its northern abutment was Trångsund, where this picture was taken.

Trångsund was home to, among other things, the Hermansson mansion, which from 1906 housed a furniture shop. This is one of the few really old grand mansions in Umeå, comprised of two buildings at an angle to one another. When Umeå’s first high-rise building, Thulehuset, was to be erected on the site, the town council decided that the Hermansson mansion should be moved to Gammlia, in conjunction with which it also got its current name, Lars Färgare’s Mansion, after the dyer (Sw. färgare) Lars Nilsson Strandberg, who owned the building and had his business there in the early 1800s. 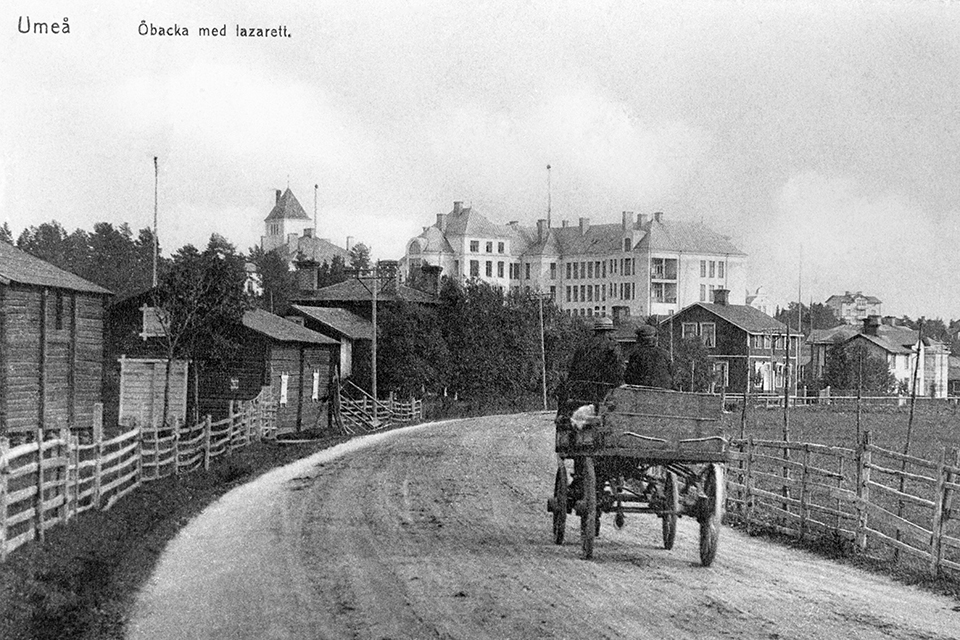 Many views in Umeå have changed over the past 100 years, and some of them have done so several times. At the beginning of the last century, this gravel road passed through a rural setting where the present day university hospital now stands. The site of the old hospital up on the hill is now home to the newest parts of the university hospital. Exactly when this photo was taken is unknown, although it appears on a postcard sent by post in April 1915. The photo is from the Stellan Rosén photo collection at Västerbotten Museum. 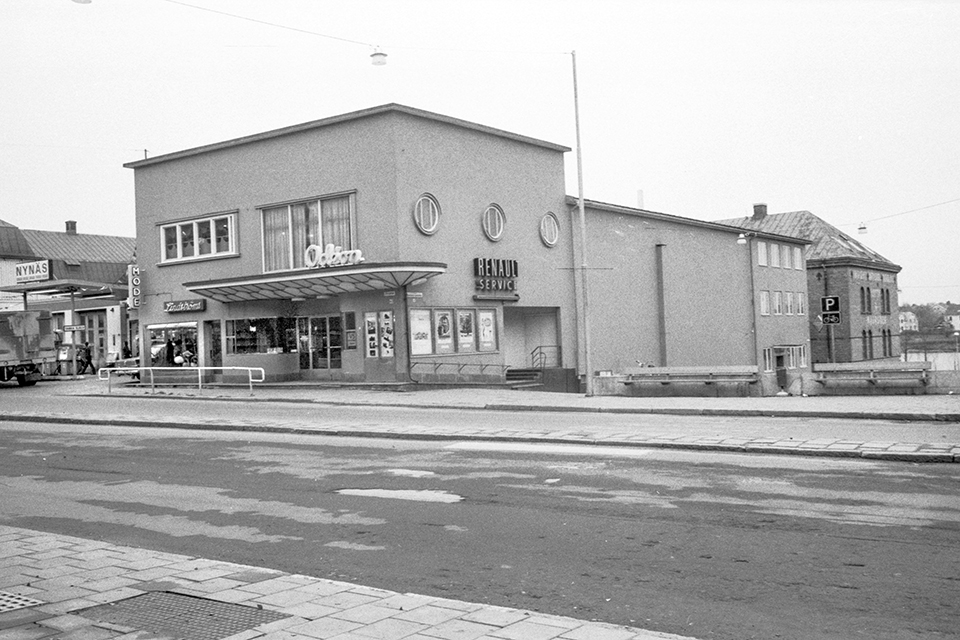 Umeå has had many cinemas, including Svea, Uman, Skandia, Imperial, Röda Kvarn and Talia. According to the Åke Boström collections at Västerbotten Museum, the first cinema opened in 1909. For many of Umeå’s older residents, the Odeon cinema, built in 1938 in a functionalist style, was a familiar landmark. The cinema was located at Storgatan 40, in the same location as the present day Scandic Hotel Plaza. 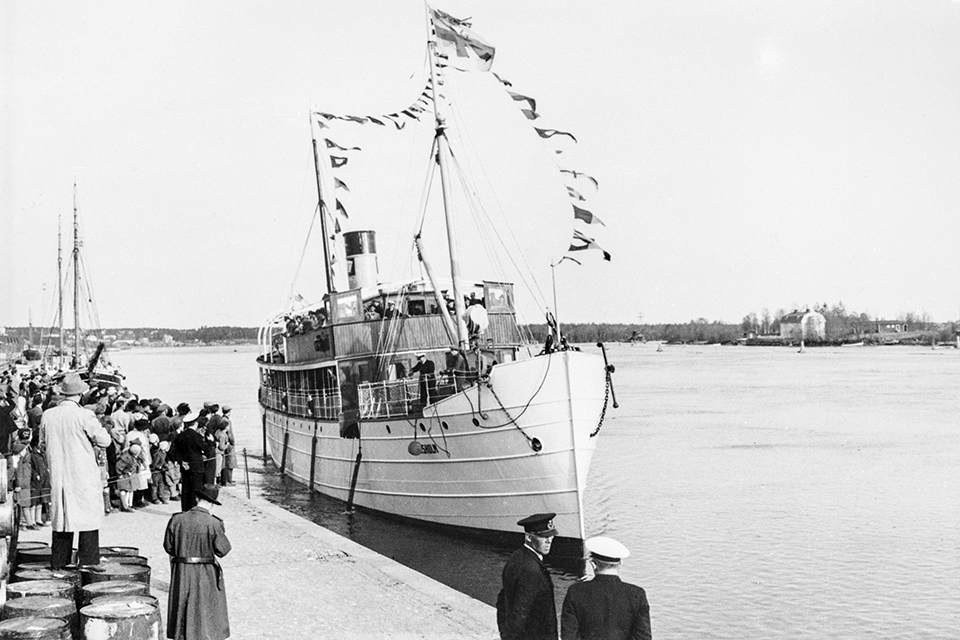 The first steamship to cross Kvarken, the strait between Sweden and Finland, was the Swedish steamer Norrland, which in 1837 and the following years made a number of trips between Vaasa in Finland and Rådhuskajen in central Umeå. Norrland was followed by other vessels that made more or less regular trips between the towns found on both sides of Kvarken. 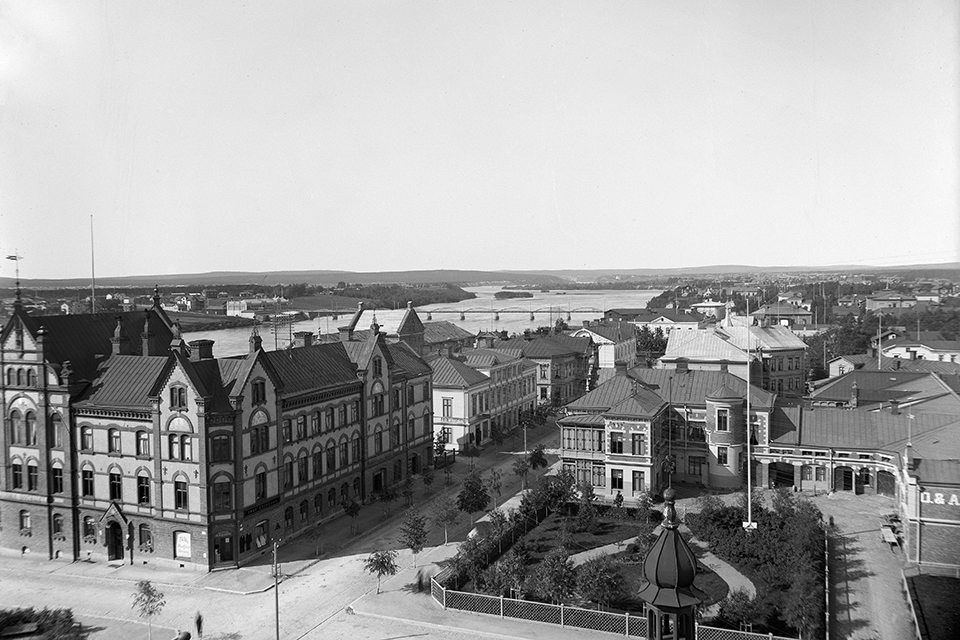 Here we are afforded a view seen from the town hall tower in about 1910. Down to the left, we can see Stora Hotellet, while on the other side of Storgatan, where the Sparbanken branch is now found, was the trading company O. & A. Grahn, which also had a small park. We can even glimpse parts of Smörasken and the von Ahn warehouse in the photo. We can see some development on the Teg side, including the brewery by the old bridge.