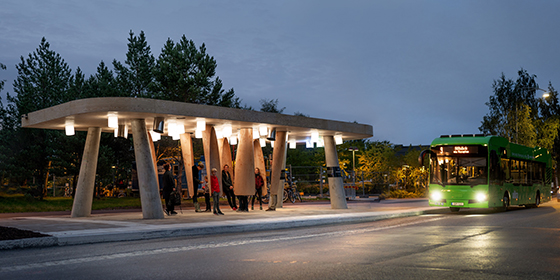 A Station of Being

A Station of Being is a new, experimental bus station for the Arctic Region. The station transforms the uncomfortable experience of waiting into a transitional experience: a moment to ’just be’ and ‘change your state of being’– before heading for a new place and new activities. The first prototype of the bus stop was inaugurated on 2 October 2019 during the EU Arctic Forum in Umeå, Sweden.

“Bus stop Universum, which is part of the EU project Ruggedised, gives Umeå an opportunity to participate in an international development project where different parties contribute with the skills and resources to test brand new solutions. Now we hope that the bus stop will help more people take the bus instead of a car, but also that smart solutions and new sustainable materials will turn tedious waiting times into quality time, says Janet Ågren, 2nd Deputy Chairman of the Municipal Board, Umeå Municipality, which is one of the participating parties in the project.

With heat records being broken in the Arctic region this summer, climate change is a major societal and environmental challenge in the Arctic region. The City of Umeå is undertaking various sustainability projects, one of which aims to promote sustainable travel. Yet, with several months of snow per year and temperatures getting down to -30°, buses are sometimes the only alternative to cars. As electric technologies are becoming reliable even in these climatic conditions, Umeå is moving to all-electric buses and procured a project to RISE, where RISE and the Dutch Rombout Frieling lab worked to transform the public transport experience, focusing on the bus stations. The Station of Being is a first outcome.

Waiting for a bus in Umeå may well mean standing on an icy platform in a cold snowstorm, continuously on the lookout out for the bus, while trying to escape into a mobile phone. Even though with rapid bus frequencies in Umeå it may only be 5-10 minutes, it does not make taking the bus very attractive.

In may be no surprise that the design team, together with students of the Umeå Institute of Design, recorded many travelers describing the waiting experience as stressful, wasteful and unpleasant. More surprising were observations of travellers waiting inside, until they saw the bus appearing through the window – and then run mad for it. At the same time the traditional shelters and seats, which ironically are the same as in many places in the world, were left unused, for instance because the bus could not be seen, or because snow had piled up in them.

At the same time the designers got to understand the desire of commuters to have some time to ‘free the mind’. “Being in transit means also transitioning mentally” Rombout Frieling explains. “From a stressful day at work to again a lot going on at home, for instance”. The designers realised the potential of turning ‘wasting waiting time’ into getting ‘time to reflect, to feel, to just be’ – which became central for the project.

To achieve this, the designers first of all felt that not the travellers, but the station should continuously lookout for buses coming. This resulted in a smart roof, integrating lighting and sounds. These gently inform travellers when a bus is on approach. Every bus line has its own signature: For instance, when bus line 9 to Röback, that hosted local glass makers, is 20 seconds away, ‘glassy’ tones sound through the station and yellow shades appear on the ceiling and on the pavement. This mediascape frees travellers from having to look at the bus and gives them time to ‘just be’ until they are ‘woken up’, while providing a meditative atmosphere to be in.

Secondly, the designers aimed to provide a comfortable space to ‘be’. A seemingly evident solution would have been to build an enclosed space with seats and heating, however the reality proved more complex: The team clearly understood the preference of commuters to be outdoors after a day of indoor work. They also observed that most travellers preferred to stand, move their body or lean against a wall for a few minutes instead of sitting down on an, often cold or snowy, seat. This, in combination with energetic requirements and an ambition of creating an open, accessible space, articulated the design challenge: How to make waiting outside comfortable in a variety of weather conditions – without needing energy?

Pods became part of the unconventional answer. The pods, looking like rigid, wooden jackets and hanging from a giant timber roof, invite travellers to lean in them very comfortably. They can be rotated easily, so that one could always stay out of the wind, no matter in which direction the wind blows. “In contrast to the traditional shelter, which only gives protection in a few wind directions”, Rombout Frieling explains. The pods also invite people to move their body and to create various social situations: looking at each other, or keeping others out of the wind. The beauty is that the pods provide comfort and warmth without consuming any power.

The Station of Being at Universum, located in the middle of the Umeå University Campus, is largely made out of locally grown and produced timber and consumes a comparable amount of energy to traditional bus stations. The little electrical power needed is provided by the Umea hydropower generator. The designers also paid attention to maintenance: Unlike traditional bus shelters, the snowplough can drive through the station and directly clear it from snow, as the pods move away automatically - making the station accessible, safe and comfortable.

A video can be seen at:
www.rombout.design/station-video