Cities have various kinds of services and tools to lower the threshold for youth to be more active, but are also in need of new services and approaches toward physical activity to reach all children especially those who do not have access to sports due to example financial, social och physical disability. The services provided by the cities are not enough and that is why the project includes Sports confederation and sport clubs.

The project consortium consists of five organisations which are the cities of Jyväskylä, Tartu and Umeå. The two other parts are RF/ Sisu Västerbotten and Jyväskylä basketball academy. The three cities are approximately the same size (medium-sized cities) and from similarly structured societies, the practices and solutions are easily transmitted and piloted in other participating cities.

The project believes that our holistic and active approach on physical activity in early stages of life can lead us to the right direction.

The theoretical framework is a good place to start when developing both the services of the cities and the way we coach sports. The philosophy of physical literacy act as a model to which we can compare and evaluate our actions, operational programmes, as well as our built environments. The physical literacy sets a global context which we can use as a tool to examine and evaluate our sometimes quite differently organised societies European wide.

Prior each meeting, the partners will discuss the theme in their own organization and prepare to share their results to the whole project group. The aim of the meetings is to create guidelines towards a more physically literary city.

After each meeting, there will be feedback and evaluation.

Meetings and progress in the project

The first meeting was a kick-off meeting for the whole project. The aim was to gather the project personnel from each participating organisation in order to go through the schedule, financial aspects, tasks, aims and objectives, as well as any practical information or concerns relating to the project such as ways for communication. Since all key members of the project have not met each other before, the meeting was also about networking and getting to know one another to guarantee swift communication and cooperation throughout the project.

Visit to the university and Hippos hosted by Eeva Simula, Sport services

Work with project revising the project objectives and execution.

Work with project confirming the dates of the study visits, discussing the practical issues such as internal communication, setting the dates for monthly conference calls between the core group and deciding on online project tools and platforms.

Thursday the 15th of September to Friday the 16th of September it was time for the third meeting regarding the IMPACT project. This meeting was hosted by us in Umeå. The project partners from Tartu and Finland were invited to a rainy visit in Umeå.

We started our program Thursday morning with several presentations. First an introduction of the city of Umeå. Secondly a presentation of RF/SISU and thirdly the pre-school Ejderdunet gave a very interesting presentation of the power in implementing the mindset of physical literacy in a pre-school. Finally, the project partners presented their assignment for this meeting which was to reflect on findings of similarities and differences between our countries. Umeå should have been the last city to visit but due to both the pandemic and the war in Ukraine we have had to postpone the whole project which means that the final visit will be to Tartu in November.

After lunch we went on three guided tours which started at IKSU. IKSU is one of the biggest fitness centres in Europe and is also a sports club.

Another tour was to Fritidsbanken which is a library for sports equipment powered by RF/SISU and Idrottsservice. Anyone can borrow equipment for free.

Nolia sports field was the last guided tour. At Nolia there are several facilities used for different sports for example indoor football, floorball, ice-hockey, curling, track and field and tennis. All the participants were also offered to walk along the river through a physical literacy path before dinner.

For the early risers Friday morning offered an opportunity to go kayaking in the river. A significant part of the Finnish delegation took part in the activity even though it was pouring rain.

After that, the project meeting joined the Change the Game-conference at Mötesplats Stöcke. The location in itself is interesting. It is the first facility in Sweden built with physical literacy as a compass. It is a small sports club in a village outside of Umeå which has gathered both commitment and money during seven years to make this dream come true. It is impressive. One part of the programme was to study their innovative solutions in the facility. The theme for this year´s Change the Game conference was “Cooperation and Community Development”. Dean Kriellaars, professor at the University of Manitoba in Canada, an absolute world authority in the field of Physical Literacy started this day. Among the other speakers were Niklas Huss from Mindshift Sweden and Kajsa Mickelsson the secretary General of the Committee for the Promotion of Increased Physical Activity appointed by the government.

After lunch at Mötesplats Stöcke, we went back by bus to Umeå and Idrottens hus (house of sports) to continue our project meeting. We started by reflecting on these two days in Umeå and the IMPACT project. After that, we discussed a future cooperation between our countries. One idea called PL 360 was discussed. We closed the day with cooperation and talks in smaller groups. To this the foundation behind Change the Game joined to tell the story about their history and work. During this session we also planned for our meeting in Tartu in November. 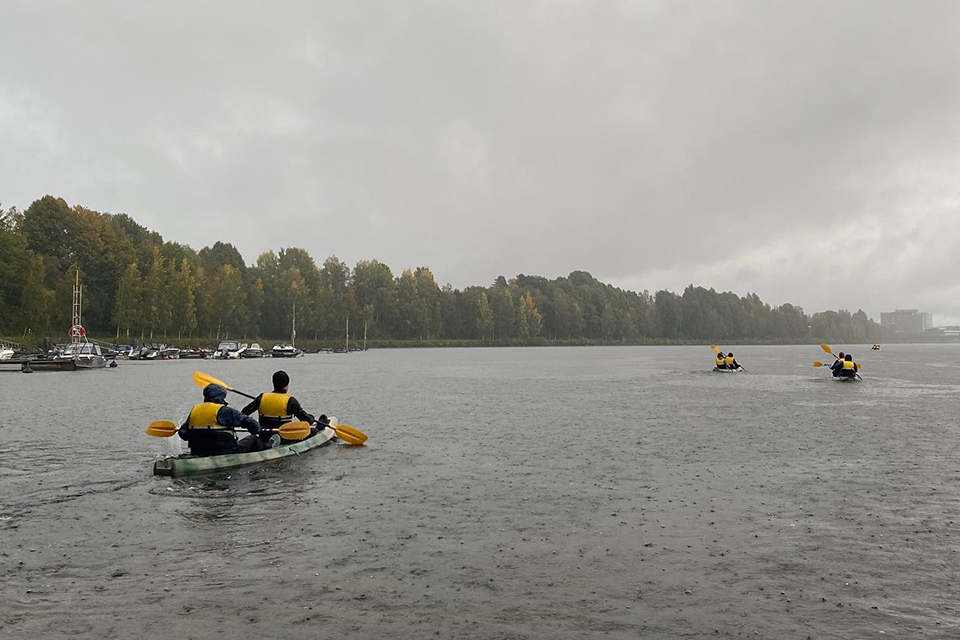